The striker signed a one-year contract for the Arabian club.

The 29 year old was available on a free transfer after leaving DR Congo side TP Mazembe. 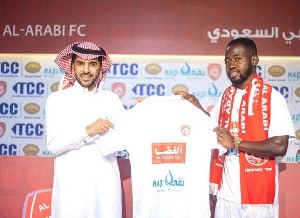 The player has plied his trade for Pro League side Al Wahda in 2007 and Arab contractors in 2017.

The former Al masry forward played in Turkey between 2011 to 2015 where he featured for clubs like Bucaspor and 1461 Trabzonspor.

Al-Arabi becomes the 11th club Torric Jibrin has played for since he left Hearts of Oak in 2009.

Torric Jibrin began his career at Hearts of Oak On  November 3,2008.