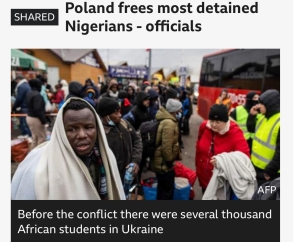 Most of the Nigerians detained at camps in Poland after fleeing the war in Ukraine have been released, the Nigerians in Diaspora Commission has said.

A total of 13 were released following the intervention of the Nigerian embassy, it said in a statement.

Five other Nigerians had “unfortunately” applied for asylum and would not be released until Poland took a decision on their request or they withdrew it, the statement added.

Africans repeatedly complained of racism while trying to leave Ukraine at the start of the war.

There were numerous reports of Ukrainian security officials preventing them from catching buses and trains going to the border.