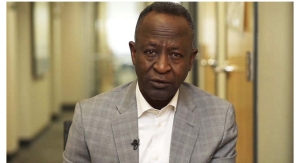 A racist insult broadcast live on Sudanese television during a high-profile trial involving ex-President Omar al-Bashir has triggered an outcry against the racism that continues to permeate Sudanese society three years after the long-time leader was ousted.
Warning: This article contains words which some may find offensive
Bashir’s defence team were chatting among themselves in the courtroom in the capital, Khartoum, and did not realise that their microphones were still on.
One of them was heard to say: “This ‘slave’ with his ugly nose irritates me.”
The Arabic word for slave, “abd”, is often used in Sudan to refer to people whose perceived roots are thought to be African instead of Arab – and is a derogatory term used to describe black people. 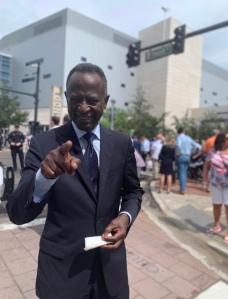 The comment, about three hours into the hearing, had nothing to do with the trial being aired on Sudan TV and the YouTube and Facebook pages of the Sudan News Agency (Suna).
The men were discussing renowned journalist Lukman Ahmed, who had just been sacked as director of the state-owned broadcaster, where I also used to work.
Ahmed, a former BBC Arabic correspondent who originally comes from Darfur, had been appointed to the role when a civilian coalition and the military were sharing power after Bashir’s ousting. 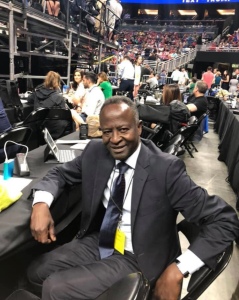 Last October, the generals reneged on the power-sharing deal, launching a coup. Ahmed stayed on in his post for another six months, but in the end he was accused of failing to honour the military head of state, having relegated news about him to the bottom of the bulletins.
A clip of the lawyer’s comments went viral, with many on social media quick to denounce the racist slur made at Ahmed’s expense.
It brought to mind one of the slogans of the 2019 uprising when revolutionaries chanted: “Oh you arrogant racist, the whole country is Darfur.”